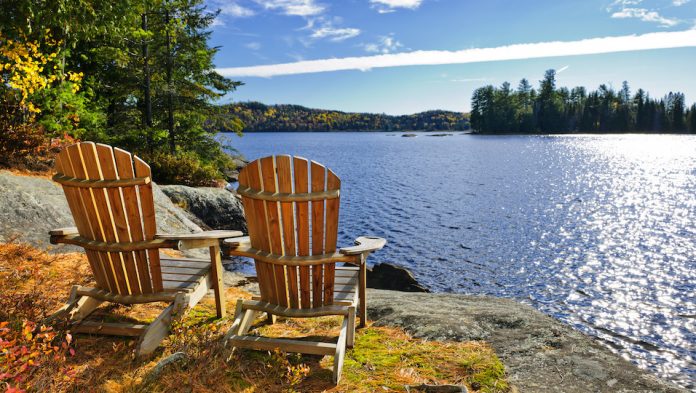 Staying safe in the great outdoors takes more than avoiding dangerous animals. Sometimes predators are too small to be seen with the human eye. Since parasites, bugs, and bacteria lurk around every corner, you need to be vigilant. But that doesn’t mean you can’t enjoy the wonders of nature. What you need is a clear understanding of what is and isn’t safe when you’re out in the wild. Here’s a breakdown of the strange diseases you could come across on your next trek through the wilderness, and what you can do to avoid them.

No matter how clear and refreshing that babbling brook looks, don’t drink the water. If you do, you may take in more than you anticipated. Giardia is a parasite too tiny for human eyes to detect. Nonetheless, it will give you bloating, abdominal pain, and a bad case of diarrhea, according to the Center for Disease Control and Prevention (CDC). Giardia has a protective shell that permits it to survive outside of the body for long periods. That hard shell also protects it in chlorinated water and from disinfection, which is how it often spreads. So, the next time you venture into the woods, make sure to bring your own filtered water or a personal water filtration system that you can carry in your backpack.

Here’s another reason not to drink from lakes and streams — cryptosporidium infection. This microscopic parasite can survive for long periods without a host. Purposefully drinking or accidentally swallowing lake water is a good way to get this parasite. This tiny, one-celled parasite enters the body, then travels to the small intestine, where it will burrow into the intestinal lining. Eventually, it sheds off in your feces. In healthy people, cryptosporidium infection causes an attack of watery diarrhea. Generally, the infection stops within two weeks. However, for those with a compromised immune system, an infection can be deadly without treatment. To avoid this bug, practice good hygiene and avoid swallowing water from lakes and streams.

This nasty germ is as bad as it gets when it comes to warm freshwater lakes, rivers, and hot springs. Naegleria fowleri, often referred to as the “brain eating amoeba,” is a single-celled amoeba that can cause a devastating yet rare infection of the brain called primary amebic meningoencephalitis or PAM. According to the CDC, when contaminated freshwater enters through the nose, this propels the amoeba to travel into the brain where it begins to destroy the brain tissue. Something that is typically fatal. The only way to protect yourself is by keeping water from getting up your nose. This lowers your chances of the “brain eating amoeba” infecting your brain. Keep in mind; you can’t become infected from swallowing water; it has to travel up your nose directly. So, wear nose plugs when swimming, and particularly when diving in fresh, warm water.

If you’re the adventurous type who wants to journey to the center of the earth, you may want to protect yourself from histoplasmosis or “caver’s disease.” Spelunking, as it’s known, is the hobby of exploring caves. But with those caves often come bats. And with those bats always comes bat droppings. Infection occurs by breathing in spores of a fungus often found in bat poop. Most healthy people may never know they’ve been infected. However, for infants or those with compromised immune systems, histoplasmosis is quite serious. Symptoms include chills, fever, headache, muscle ache, chest pain, dry cough, and fatigue. There are only two ways to protect yourself; avoid caves, or wear a respirator mask. The Mayo Clinic suggests consulting the National Institute for Occupational Safety and Health to determine which mask provides the best protection for the type of exposure you’ll be experiencing.

If you live in the southwestern U.S., you’re likely familiar with valley fever, also called coccidioidomycosis. This infection occurs when people inhale fungi that belong to Coccidiodes, according to the CDC. Tiny spores live in the dirt floor of the desert, and when the wind blows, these tiny spores can get carried around. It’s difficult to prevent exposure to Coccidioides in areas where it’s common in the environment. However, those who have underlying health conditions should try to avoid breathing in large amounts of dust by perhaps wearing a mask on windy days.

In 2012 Live Science reported that hantavirus sickened 10 people, three of whom died. This airborne virus spreads via rodent droppings, saliva, and urine. According to the CDC, it can become airborne when swept up, causing hantavirus pulmonary syndrome (HPS). Unfortunately, this respiratory disease has a high mortality rate, mainly because it’s not recognized in time. Dry sweeping, occupying a place that has been empty for a long time like a cabin, and hiking or camping in rodent-infested areas places you at a high risk of getting hantavirus. To protect yourself, spray dead mice or their droppings with disinfectants before removing. In addition, refrain from sweeping and rising dust.

After trekking through the great outdoors, the only thing you should be bringing back with you is happy memories — not bacterial or fungal infections. Nature, after all, is a healing environment. Stay safe!