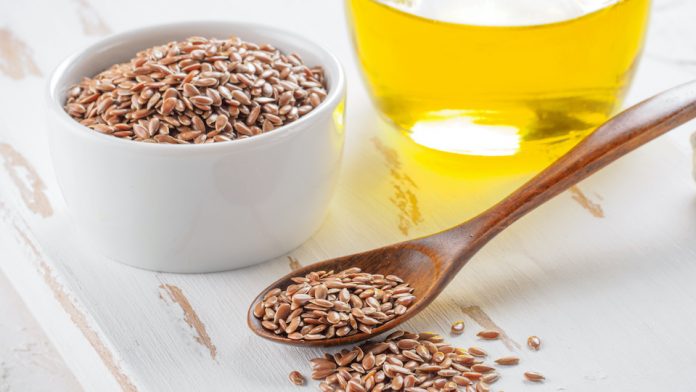 Smoothies can kickstart your day and keep you satiated throughout the morning. They’re a trend that’s still going strong, because they can be made to order, filled with the specific nutrients that your body craves. But no matter what you put in your smoothie, whether berries and greens or protein and seeds, there’s one ingredient you should be putting in your smoothie each morning — especially if you are a woman.

“Superfood” for your morning smoothie

There’s an omega-3 fatty acid you can’t live without. Its health-promoting benefits are vast and range from protecting the skin to helping you fight heart disease, breast cancer, and more. So, what is this “superfood” ingredient that women should be including in their morning smoothies? Flaxseed oil.  Flaxseed oil, also known as flax oil, is made from grinding and pressing flax seeds to release the natural oil. There are three types of fat that the body needs inside the omega-3 fatty acid component: ALA (alpha-linolenic acid,) EPA (eicosatetraenoic acid) and DHA (docosahexaenoic acid.)

EPA and DHA are primarily found in oily fish, like salmon, tuna, anchovies, and sardines. ALA’s are mainly found in plant-based sources like walnuts, canola, and flaxseed, with flaxseed supplying the densest source. In fact, one tablespoon contains an impressive amount of omega-3 fatty acids (7,196 mg.) Most guidelines recommend about 1,100 mg daily for women and 1,600 mg daily for men, which means one tablespoon can meet your daily needs. Additionally, ALA converts in small parts to EPA and DHA, according to research. So, if you aren’t getting enough oily fish in your diet — about two servings a week — then flaxseed oil may be a good solution to help meet your omega-3 fatty acids requirements. Here’s why you need this superfood daily.

Lignans are fiber-associated plant compounds found in foods, such as nuts, grains, seeds, vegetables, and drinks such as wine, coffee, and tea. But the highest amounts of lignans are found in flaxseed.  In fact, flaxseed contains almost 800 times more lignans than other foods, according to research. Lignans are the type of phytoestrogens that can change estrogen absorption. In postmenopausal women, studies show that lignans can help the body produce fewer active forms of estrogen, which is thought to potentially reduce the risk of developing breast cancer. A Canadian study that included 6000 women found that those who consumed flaxseed in their diet had an 18 percent lower chance of developing breast cancer.

When 13 women were supplemented with flaxseed oil, one study found that it led to significant decreases in sensitivity, roughness, and scaling of the skin. Additionally, skin smoothness and hydration were increased.

Helps relieve both constipation and diarrhea

Adding flaxseed oil to your smoothie may also help keep you regular. An animal study found that flaxseed oil, while acting as a laxative, provided regularity. However, it also helped relieve diarrhea.

May help with ovarian cysts

Polycystic ovary syndrome or PCOS is a hormonal disorder that causes enlarged ovaries with cysts. According to research, adding flaxseed oil to your diet for six weeks might lower triglyceride and insulin levels in women with PCOS.

Ground or oil is always best

Flaxseed is definitely one of the five seeds you need to be eating daily. But eating them whole is not really a great way to consume them since they’ll pass through your intestines undigested. So, you won’t reap the benefits. Ground or in oil form is really the best way to get your ALA. However, buy smaller bottles of flaxseed oil (that come in dark containers) over larger bottles, and store them in the refrigerator, since flaxseed oil can spoil quickly. Plus, don’t use the oil past the expiration date on the label. Finally, this is not an oil you want to heat, since it has a low smoke point. Just drop a tablespoon into your morning smoothie and enjoy!