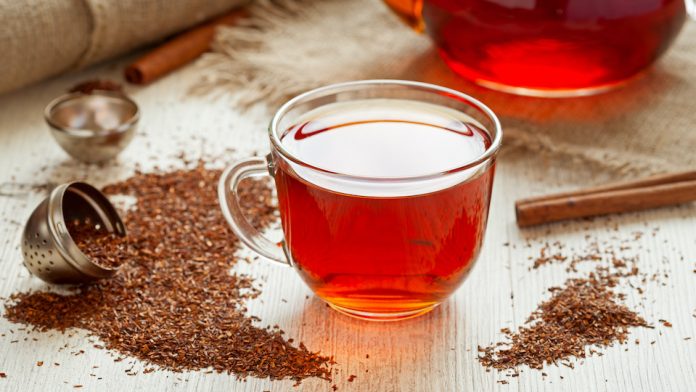 Rooibos tea, also known as red tea or red bush tea, is made from the leaves of a shrub called Aspalathus linearis, which is grown on the western coast of South Africa.

Rooibos is a herbal tea and is not related to green or black tea. The fresh leaves can be dried straight after picking, and this is called green rooibos. The more common form is made from fermented rooibos leaves, which have a red color and a sweeter taste.

As you’ll find out, rooibos tea has many more health benefits that can be backed by modern scientific evidence.

Rooibos tea can help you cut down on caffeine

Consuming moderate amounts of caffeine is generally safe. However, excessive consumption has been linked to heart palpitations, increased anxiety, sleep problems, and headaches. Therefore, some people choose to avoid or limit caffeine intake. Because rooibos tea is naturally caffeine-free, it’s an excellent alternative to black or green tea. The earthy flavor of rooibos tea can be satisfying enough for coffee and tea lovers, and pairs well with a little milk, honey, and cinnamon to make a delicious latte. Rooibos tea could be the perfect solution to help you cut down to healthier levels of caffeine in your day.

Rooibos tea is rich in antioxidants

Rooibos tea is brimming with flavonoids, including aspalathin, which is exclusive to the rooibos plant. Nothofagin is another flavonoid abundant in rooibos tea. Flavonoids have powerful antioxidative, anti-mutagenic, anti-carcinogenic, and anti-inflammatory properties, and one cup of rooibos tea can supply as much as 60 to 80 milligrams.

What does rooibos tea taste like? Some say it has a hint of vanilla, honey, or nut. Many people get sugar cravings when trying to switch to a healthier diet, and this tea’s natural sweetness makes it a great substitute for those sugary treats. Try adding a dash of cinnamon and splash of almond milk for a low-calorie yet satisfying cup.

Not only does rooibos tea provide a sweet-tasting distraction to keep you from wandering down to the vending machine, it also fights diabetes in multiple different ways. Studies have shown that rooibos tea can increase glucose uptake by muscle tissues and prevent insulin resistance. It also alleviates sugar-related inflammation in the blood vessels, and protects against cognitive decline – both major complications of diabetes.

Rooibos tea could stop the development of cancer

Compounds found in rooibos tea such as quercetin and luteolin have been extensively studied, and have shown anti-cancer benefits such as protecting against DNA damage, stopping tumor growth and spread of cancer cells, and preventing mutations.

Aspalathin from rooibos tea has been receiving special interest in treating neurodegenerative diseases like Alzheimer’s, Parkinson’s, and Huntington’s. In one study of 39 flavonoids evaluated, aspalathin was one of seven that had the best results for Alzheimer’s disease with no toxicity risks and high absorption rates.

Rooibos tea is good for your heart

Inflammation is known to play a role in the development of heart disease. A study involving 17 healthy volunteers took a look at the effects that different teas had on angiotensin-converting enzyme (ACE), an enzyme located in the inner layer of blood vessels that causes blood vessels to shrink, thus increasing blood pressure. The study found that one hour after people drank 13.5 ounces of rooibos tea, ACE levels went down, lowering participants’ blood pressure. Another study showed that drinking six cups of rooibos tea daily can lower levels of LDL cholesterol (bad cholesterol) and other fats in your blood while increasing the “good” cholesterol, decreasing your risk of heart attack, stroke, and other forms of heart disease.

The variety of polyphenols in rooibos tea has been shown to improve the activity of bone-growing cells called osteoblasts. The flavonoids orientin and luteolin were specifically studied on bone cells, where they enhanced mineral content and incited an overall improvement in bone growth.

Rooibos has multiple benefits, but as with anything you add to your diet, some people can experience side effects. Rooibos tea may have estrogenic effects, and has caused liver issues in rare cases in people with underlying medical conditions. If you’re concerned, consult your doctor before consuming rooibos regularly.

For most people, rooibos can be a great addition to your daily routine, with multiple health benefits. Why not try substituting one of your cups of tea or coffee for a rooibos!