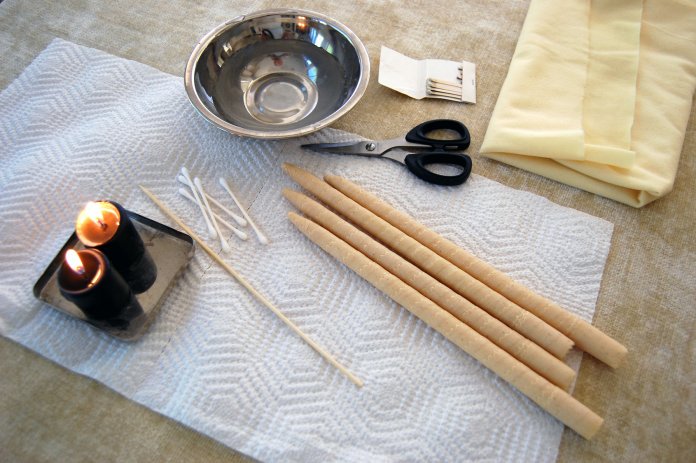 Ear wax is something that we all have to deal with. No one wants to have yellow-orange gunk in their ears. Not only can it be unsightly, it can also be highly uncomfortable if it builds up.

However, some ways of dealing with earwax are much safer than others. Some home remedies for this common hygiene issue are, unfortunately, downright dangerous.

The purpose of earwax, technically called cerumen, is simple: It serves to protect our ears. It is composed mostly of fat, and it helps keep dust and dirt from entering the ear canal. It also lubricates the ear canal, and keeps pathogens from entering due to its antibacterial components.

This is all well and good, but when earwax gets excessive, we do want to clean it out.  A common, but dangerous, solution for earwax buildup is the use of cotton swabs. The problem with these is that if they are pushed even slightly too far into the ear canal, damage can occur. Even if they are used with care, using cotton swabs can push earwax deeper into the ear — not exactly what we want to do.

An even more dangerous solution is ear candling. Ear candles are touted as an effective home remedy for earwax, but they should not be messed with. Ear candling involves inserting a beeswax tube into the ear. The far end is lit on fire, and earwax is supposed to exit the ear and be deposited into the tube.

However, not only does this not work (the wax you see in the candle when you’re done is from the candle itself), it may also lead to wax burns inside the ear. This can be incredibly painful, and may require emergency medical attention.

For many people, all that is needed to remove excess earwax is a wipe with a wet washcloth and a bit of shower water. This is because earwax naturally moves towards the outer parts of the ear through the movement of the jaw. For this reason, there is often no need to clean deep inside.

For people who do produce more earwax and have problems with earwax accumulation, a simple hydrogen peroxide and water solution can do the trick. Simply mix equal parts hydrogen peroxide (less than three percent concentration) and warm water, drop a few drops into your ear, and let it drain out.

If you’ve got a serious ear blockage, a visit to your doctor may be in order. A physician you trust can irrigate your ears, or use a syringe with hydrogen peroxide and water to apply pressure and get the wax out.

Whatever you do, never put anything too far into your ear. This includes dripping wax.