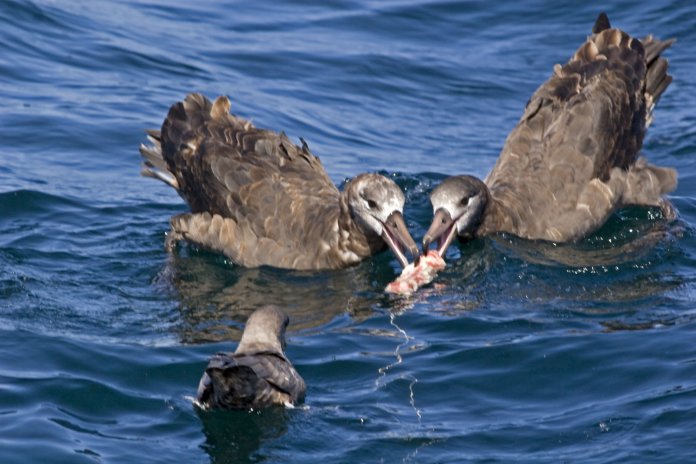 The albatross is a majestic seabird that, when flying free, has long symbolized good fortune to sailors. A trapped or dead albatross, however, is seen in folklore and literature as a very bad omen.

This symbolism is immortalized in the poem, “The Rime of the Ancient Mariner” by Samuel Taylor Coleridge. In the poem, the mariner kills an albatross that hops aboard his ship, and is subsequently cursed.

The Midway Atoll, located in the Pacific Ocean about halfway between North America and Asia, is home to a sizeable albatross population. However, these birds have been suffering a horrifying fate. In his collection, “Midway: Message from the Gyre,” photographer Chris Jordan shows us what is becoming of many nesting albatross chicks: they are dying as a result of eating plastic.

The stunningly sad photographs show the carcasses of albatross chicks, and the contents of their stomachs. Gazing at these poor deceased creatures, we can see that their guts are brimming with plastic odds and ends, including bottle caps, multicolored shards, and even lighters. Albatross parents find the plastic garbage in the polluted waters and shores of the Pacific while foraging for food, and because of its shiny, alluring nature, are attracted to it. They feed these plastic pieces to their babies, not knowing that they are lethal.

It’s difficult to cast blame on these albatross parents. They are birds, after all, and do not realize what they are doing. In their minds, the plastic is abundant, visually appealing, and accessible. They may think they have struck a goldmine of plentiful food for their babies: shiny, colorful, sparkly food. Sadly, they are dead wrong, and their children suffer and die as a result.

So, where do we come in? The choices of the albatross parents on Midway Atoll can serve as an extreme example of what parents in the United States, and all over the industrialized world, are doing. I’m talking about packaged, processed food, which often has little to no nutritional value, and contains a heap of harmful ingredients, additives, and byproducts. Many parents feed processed foods to their children on a regular basis.

After all, it’s cheap, convenient, tasty (addictive, even), and comes in brightly colored packages. Kids love it, and parents get to save some time and effort in preparing meals. They are lured by the cheap, accessible, shiny object, so to speak. It’s abundant, and many people eat it, so it can’t be that bad, right? This seems to be the reasoning.

However, to put it plainly, processed food is garbage. Even though it may be made from what were once fresh ingredients, the processes they undergo, and the additives and fillers they contain, leave them a far cry from a healthy food. Especially for children, whose bodies and minds are still developing, these foods can be very harmful.

Do not ignore the omen of the dead albatross on Midway Atoll. Even though it may mean taking a bit more time to prepare meals from fresh ingredients, it’s crucial to our children’s health. Do not be fooled by the accessible shiny objects posing as foods on grocery store shelves: these foods can literally kill us. Obesity, heart disease, type 2 diabetes, inflammation, and autoimmune disorders are no joke.

We are humans… let’s not act like we have a bird brain.

Science Says This is The Best Alarm Clock for a Happy...